Nogales, Ariz. (Feb. 2016) By volume, tomatoes remain the No. 1 produce item imported through Nogales, but watermelon imports have risen dramatically in recent years, and in the past season watermelon imports almost caught up to tomatoes, according to the The Nogales Produce Import Report 2014-15.

The Nogales Produce Import Report 2014-15 offers an analysis and comparison of three seasons of fresh produce’s imports through Nogales in volume as well as value as reported to U.S. Customs.

“It is a tool we have developed to help our members understand the overall picture of fresh produce imports and see what their participation in the industry may be. It also may help them understand the tendencies and detect opportunities to explore,” said Lance Jungmeyer, president of FPAA.

At the end of 2014-15 season, Nogales reported a total volume of 5.9 billion lbs. of fresh produce, this is a continued increase since the 2012-13 season. Approximately 89% of this volume is composed by only ten items and its different varieties, although there are over 50 different fruits and vegetables that make their way from Mexico into the country through this port to satisfy the growing demand. 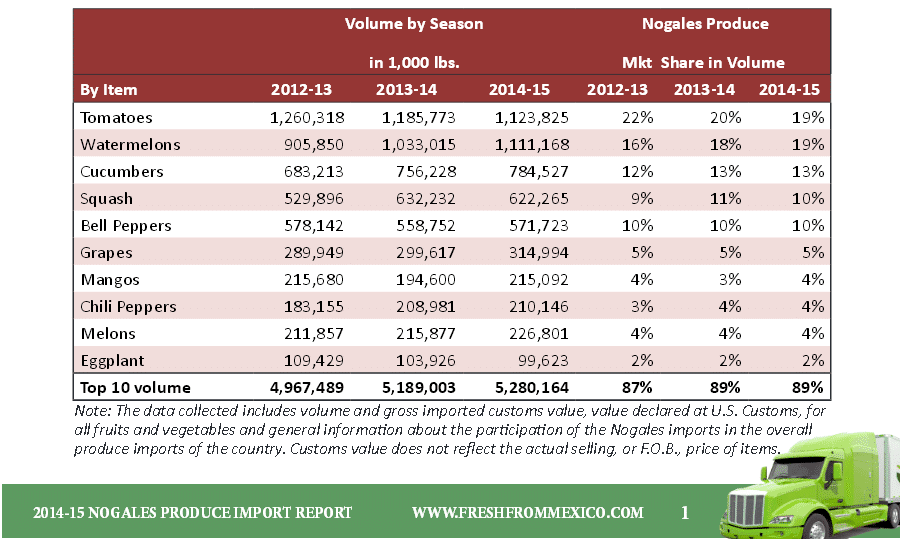 The report also shows a comparison in the volumes crossed by the main ports of entry of Mexican produce in the U.S.

Understanding the importance of the fresh produce trade happening in Nogales is not only a good tool in the decision making process of the companies involved, but it is also a reminder to the overall community of how crucial the port of Nogales is and has been in the supply of fruits and vegetables to the country, concluded Jungmeyer.