The FPAA celebrated another successful year of the Nogales Produce Convention and Golf Tournament in Tubac, Arizona.

The FPAA kicked off the event with a networking lunch, followed by three educational sessions. The first session, Building Up Arizona, Building Up Your Business, featured Juan Ciscomani, Senior Advisor for Regional and International Affairs from the Office of Governor Doug Ducey. Ciscomani shared infrastructural accomplishments for southern Arizona and the strong trade relationship between the U.S. and Mexico. The Bell Peppers and Squash: A Tale of Two Sectors session was presented by Dan Scheitrum, from the University of Arizona. This session provided attendees with the information gathered from a recent study focused on market trends for Bell Peppers and Squash. The closing session, FPAA & The Power of Connections, featured a panel with FPAA members with key roles in national organizations.

FPAA & The Power of Connections Panelists:

Sabrina Hallman: Past President of the Arizona Seed Trade Association

Before transitioning to the Opening Fiesta, the FPAA awarded Tom Stenzel with a Lifetime Achievement Award, honoring Stenzel’s dedication to the industry. FPAA President, Lance Jungmeyer, highlighted many of Stenzel’s contributions including the numerous times he has testified before Congress, his work with U.S. regulatory agencies, his involvement with the U.S. Chamber of Commerce Committee of 100 leading trade association CEOs, and the United Fresh Start Foundation, the association’s charitable foundation focused on increasing children’s access to fresh fruits and vegetables.

November 5th marked the second day of the convention. Attendees began their morning with golf and had the opportunity to join the 5th Annual Culinary Showcase, a culinary experience hosted by the FPAA, the Consulado General de Mexico en Nogales, and Visit Tucson. The day concluded with the FPAA’s Gala Event & Award ceremony. During the event, the FPAA honored its 2021 recipient, Walter Ram, Vice President of Food Safety at Giumarra Companies. The Pillar of the Industry recognition award highlights accomplishments for a member who has exhibited a history of volunteering time, effort, and impactful contributions to support the association and the fresh produce industry. (Read More about the 2021 Pillar of the Industry recipient: https://www.freshfrommexico.com/produce-industry-veteran-walter-ram-named-fpaa-2021-pillar-of-the-industry/.)

During the final day of the convention, participants gathered for a second day of golf early in the morning. That afternoon, the FPAA hosted an awards ceremony to announce golf winners for the weekend followed by an outdoor BBQ lunch.

“It had been a long two years since we last gathered the FPAA family,” said FPAA President Lance Jungmeyer. “From the networking to the golf to the education sessions, we received great feedback. We can’t wait to get together again for the FPAA Spring Policy Summit on March 16, 2022.”

Thank you to everyone that participated in the FPAA’s 52nd Nogales Produce Convention and Golf Tournament. The FPAA is excited to announce dates for next year’s convention. To learn more about upcoming events, please visit: www.freshfrommexico.com 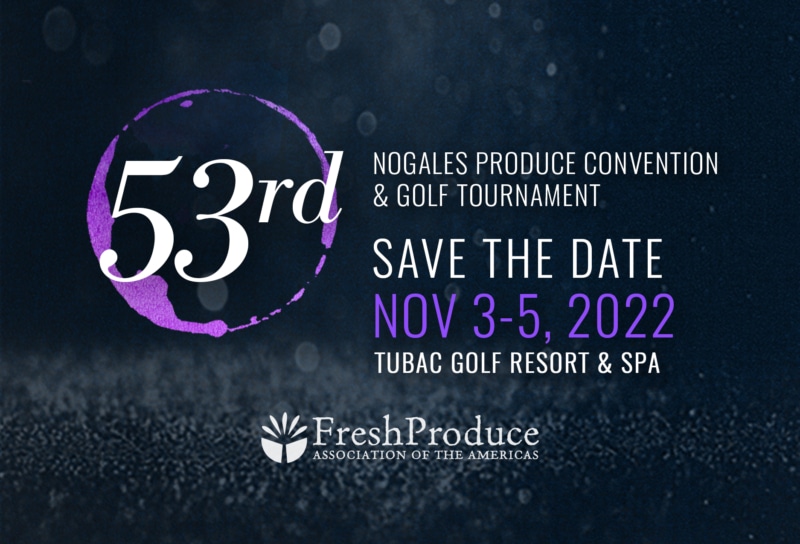 About the Fresh Produce Association of Americas:
Founded in 1944 in Nogales, Arizona, the Fresh Produce Association of the Americas has grown to become one of the most influential agricultural groups in the United States. Today, the FPAA provides a powerful voice for improvement and sustainability by serving the needs of more than 100 North American companies involved in the growth, harvest, marketing, import, and distribution of produce.

FPAA Members Name Matt Mandel as Member of the Year